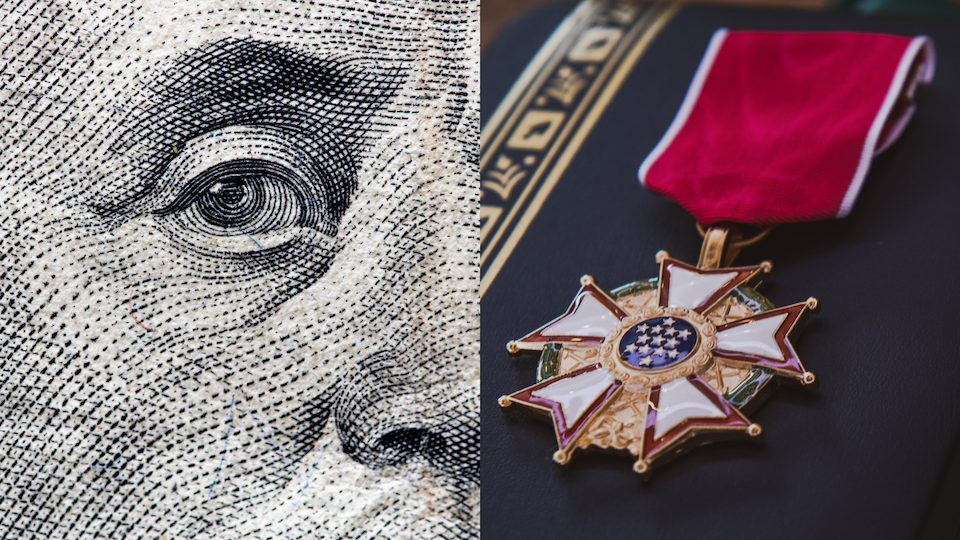 TL;DR: About half of Americans play state lotteries every year. Medals and rewards are conferred to civilians and combatants during war times in order to reward their effort towards a common cause. Why don’t we use these tools against COVID-19 as well? If we want to win the war against this invisible enemy, we’ll need to think about personal incentives as well.

New COVID cases have more than tripled in the US since the beginning of July. Even worse, deaths are following this trend too (see chart). This is happening because we’re not social distancing and wearing masks. We know we should - a Gallup poll shows that 85% of Americans are “very confident” or “moderately confident” in the belief that social distancing saves lives - but we don’t. Why is this the case, and what can we do about it?

Unfortunately, social distancing and mask wearing are not easy. As a matter of fact, they kind of suck. They’re even worse when the weather’s nice, you haven’t seen your friends in a while, and you face uncertainty about your job and ability to provide for yourself and your family. The fact that prolonged social isolation has serious mental health consequences doesn’t help either.

This is a big problem. It means that our strongest defense against the biggest global crisis since WW2 relies on people who have no strong individual incentives to participate. While we know what we need to do, it turns out that getting people to actually do it is much harder than we thought. It’s clear that the tone we’ve adopted so far doesn’t work, and people have started to tune out. Given that this is the case, how come we’re not spending more time on figuring out how to make social distancing something that people want to do? Put another way, how can we make social distancing and mask wearing an individually rational decision?

I believe the key to solving this problem lies with applying basic behavioral economics and gamification thinking to social distancing. What if we took advantage of how people respond to lotteries and awards to encourage social distancing? The pandemic is more than a logistical problem - it is also a problem of incentives. Since humans are not particularly good at recognizing non-immediate threats, especially the kind that we can’t even see, thinking about how to account for people’s individual incentives could be the only way we avoid the fast-paced version of a tragedy of the commons.

This proposal might sound crazy, but it makes sense if you do the math. If we entered everyone who social distances into a highly publicized $1M lottery every week, that would cost very little compared to the upside. Here’s why: if we create a $1M lottery every week with a few smaller prizes as well (which are demonstrated to increase the participation in real lotteries), that would cost us ~$104M a year ($1M big prize + $1M distributed across $500k, $250k, etc. prizes / week * 52). This is less than the ~$7 trillion the US economy lost in the second quarter this year or the $2 trillion Coronavirus relief bill passed by Congress in March.

This idea is influenced by prize-linked saving accounts and premium bonds, which essentially enroll you in a lottery for saving money regularly. Prize-linked saving accounts have been shown to increase savings by 12% on average, and this is for something that 95% of people probably never heard about. If this holds for our lottery too, reducing social distancing across the US by 12% would be worth the $100M. Given the fact that an infected person usually infects more than one additional person, the economic and health impact would be greater than linear. On top of that, when you take into account the fact that about half of Americans play state lotteries every year, the chances that this would work look even better. If half of those people join this lottery as well, we stand a much better chance of defeating the virus and reducing its impact on our economy. The lottery would more than pay for itself!

You might quip that the decrease in GDP was a result of social distancing. This is partly true, but it was also a necessary measure focused on flattening the curve and saving human lives in light of an uncertain threat. It is also not supposed to be a long-term response. On top of that, sensible social distancing has a good economic payoff. To know why, all you have to do is look at countries like New Zealand, Taiwan, South Korea, and Vietnam. By starting with strict lockdowns and then relaxing social distancing gradually, based on the growth in case numbers, they were able to control the virus. Now, they can reap the benefits of their work. Their economies, including restaurants, are open (albeit in a limited fashion), and social distancing is not as draconian as it used to be in the beginning. Since they were able to effectively fight the first wave of the virus, these countries can now focus on tightening and relaxing social distancing based on the number of new cases and contact tracing, which makes social distancing much more bearable and reduces the economic impact drastically.

While promising, I don’t think a financial incentive would be enough. First of all, it would hardly tackle the mental health issues related to social distancing. Secondly, financial incentives alone can backfire. People don’t only do good things for money, but because they want to project or signal that they’re part of a specific group, they’re ethical, or simply because they’re civic-minded. To stimulate this, I believe we could use a tool that has been shown to work for millenia: medals and awards.

Awards and medals are very effective. Monarchies and republics alike create state orders that are used to reward loyal subjects in times of war and peace (the US Presidential Medal of Freedom, the British Order of the Garter, and the French Légion d’honneur are some of the most recognizable ones). To encourage science and innovation, countries have established academies of science that award prestigious positions, prizes, and even monetary rewards. Similarly, nonprofit and for-profit organizations give awards too: some that come to mind are the Florence Nightingale Award given by the International Red Cross, the Google X Prize, and the Oscars, all of which encourage great work in different fields.

Awards work because they provide social recognition and improve the status of the recipient. It is no surprise that medals are conferred with abundance during wars, when states need to rally the population against a common enemy. Awards can ultimately encourage participation and buy-in from the population during extremely difficult times.

Why not use them in our war against the COVID-19 pandemic too? In order to make social distancing more bearable and incentivize buy-in from the population, we could create awards and medals for social distancing (we should probably do the same for emergency workers, including those who work in high-risk locations like grocery stores, but this is for another conversation).

This award could be given by countries, international organizations, or nonprofits. For example, the United States could create a Presidential Medal of Bravery during the COVID-19 Pandemic. You could also create a Bill and Melinda Gates Foundation Award, modeled on how the International Red Cross awards the Florence Nightingale Medal to nurses for devotion and courage. If governments don’t step up, private nonprofits could certainly fill the void as well.

These awards could be conferred at regular time intervals, similar to the lottery outlined above. They could come with perks, like access to social-distanced picnics (when social distancing rules are relaxed) or Zoom game nights, when things are not safe. More importantly, they could come with a small budget for advertising those who win (i.e. put the faces of recipients on billboards and posters). This would create a flywheel effect, encouraging even more people to participate.

A valid concern about my proposal is that the implementation itself is not feasible, even though the thinking and numbers sound promising. These proposals would require clear social distancing directives, a way to check who respects them, restricting travel between US states and areas with outbreaks, contact tracing, and mask wearing. However, this is all possible to implement for a reasonably organized government, and it would rely on the same infrastructure we need to implement anyway if we’re serious about fighting this pandemic.

For example, we could use the Google/Apple-based privacy-friendly contact tracing apps (or other effective methods, like calling people at home) to verify who is participating and who isn’t. People could opt-out if they really wanted to, and those who need to go out could be accommodated as well so they’re eligible (Too concerned about privacy? There are some workarounds.). The edge cases are not that complicated, and all we’d need to do is build on top of existing frameworks and systems. We don’t need to reinvent the wheel to encourage people to see social distancing as beneficial.

To further demonstrate that the US is capable of implementing this, all we need to do is to look at Vietnam, a country of 100M that has 1/25 the GDP per capita of the US and ~1/60 healthcare expenditure per capita. Vietnam had virtually 0 COVID deaths until the end of July, with only 900 cases so far (the US has 5.1M cases). The only COVID-related deaths are associated with a local outbreak in Da Nang during the past few weeks. The outbreak was swiftly dealt with, and new deaths/cases are trending close to 0 again. If they can enact social distancing protocols on a budget, so can we.

If there’s anything I want people to take away from this essay, it’s that we need to consider people’s personal reactions to social distancing if we want to defeat the virus before a vaccine is available. I believe that there are other ideas in addition to lotteries and awards that could work. These simply seemed like the most obvious ones to me right now, but you might have better ideas. In fact, I’m interested to hear if you do: tmarcu@princeton.edu

Thanks to Kate Northrop, Nader Al-Naji, Kyle Barnes, Lauren Johnston, Ayushi Sinha, and Eno Reyes who were generous enough to provide feedback, advice, and really interesting commentary to various drafts of this essay.